Abstracts:
Flying insects, particularly bees, transfer pollen to flowers to facilitate plant reproduction. The Western or European honeybee (Apis mellifera) may get the most attention because of the honey they produce, but other bees pollinate vegetables, berries, and other fruits on which we all depend. Adding the natural history of bees to the agricultural history of food production underscores the fragile relationships between pollinator, plants, and humans.

Flying insects, particularly bees, transfer pollen to flowers to facilitate plant reproduction. The Western or European honeybee (Apis mellifera), native to Europe, Asia, and parts of Africa, often receives the most attention because of the honey that results from their pollen-storage system. Yet other bees bear the burden of pollinating vegetables, berries, and other fruits on which we all depend.

Plants and insects developed mutually beneficial relationships over millions of years. The plants depended on insects to reproduce through the transfer of pollen from pollen grain to flower stigma, as the insects ate the plants’ pollen and nectar. Bees, a flying insect, became distinct by gathering and storing pollen to feed themselves and their young. DNA research confirms that bees coexisted with flowering plants from the beginning of flowering plants 130 million years ago. Archaeologists find evidence of bees in fossilized resin (amber).

All bee species (about 20,000) evolved along with plants in localized biospheres, but only those classified in the genus Apis are technically honeybees. Millenia before humans moved Apis mellifera around the globe, squash bees, bumble bees, and solitary bees, among many others, pollinated crops, including crops native to the Americas, i.e., squash, pumpkins, cranberries, tomatoes, avocados, and potatoes, to name a few. Native bees pollinate plants in their ecosystem more efficiently than does the popular Apis mellifera. In fact, the imported European or Western honeybee completes with the native species for pollen, and humans give Apis mellifera an advantage through special treatment to ensure honey production. This puts other bees more proficient in plant pollination at a disadvantage.

Do museums interpret the complexity of human intervention in the natural process of pollination?

Often interpretation focuses on honeybees, and the artifacts of the beekeeper who worked with them. In North America, colonists imported Avis mellifera to ensure access to honey and to sustain crops imported with the bees. When honeybees swarmed into hollow trees, the beekeepers sometimes cut out the tree and moved the pollinators closer to their gardens, orchards, and clover fields and moved the honey source closer to their kitchen table.

Humans intervened further in the lives of pollinators by designing different types of homes for bees. The most lasting example of innovation resulted from close and persistent observation of bee behavior. Lorenzo L. Langstroth’s 1852 U.S. Patent for an improved method of constructing beehives revolutionized beekeeping at the time. Langstroth established the concept others have called “bee space” and his basic removable-frame-in-hive design remains an industry standard.

At least one patent holder took inspiration from bees’ natural homes, but only the form, not the function. An 1869 U.S. Patent confirms that tree-hives captured the imagination of Charles E. Spaulding. He explained that his “honey-boxes of a round form…conform more nearly to the natural depositories of the wild bee” and that they “correspond to hollow limbs, which are sought out by the bees in their natural or wild state.” Spaulding, a cheese-box maker in Theresa, New York, thought in the round anyway (the common form of cheese boxes), but his improved hive suited human need more than that of bees. Security features to reduce the likelihood of theft and exterior artwork advertised his product while appealing to consumers. Bee behavior influenced his innovation little.

Rarely do museums address the other side of the honeybee story.

In fact, honeybees undermine the natural relationship of native species because honeybees compete for pollen to produce honey which can undermine the work of less numerous native pollinators in their natural habitat. Humans bear some responsibility for ensuring balance between the bees that exist to pollinate, and those that exist to produce honey. Exploring this reality increases opportunities for history museums to interpret the environment, and agriculture.

In museums that do not interpret agriculture as either their focus or as a topic relevant to their mission, staff can still link their collections to link natural history and the history of domestication. Specifically, advertisements or decorative arts featuring beehives provide a hook to discuss relationships between honeybees, domestication, natural and domesticated plant pollination, and human manipulation of the process. Discussion of foodways in historic houses may naturally lead to the topics of bees and pollination. Those discussions can provoke more thought by distinguishing between food on the table, between imported plants compared to native species, and between imported and native bees. Namely, crops such as grain (wheat, rye, oats) and maize (corn) remained dependent on the wind to move pollen. Humans cultivating these crops did not have to manage hives as market gardeners and truck farmers did (and still do). These comparisons beg for explanation of both natural history and the history of domestication.

Practice your powers of observation by identifying the fruits in this painting by a Mexican artist, and then explore the types of native species that cohabitated with them. Find a still life of foods from your museum’s home (or use your own well-researched foodways program as the basis). Then put the food on a plate in a historic house interpretation that prompts conversations about plant propagation through the natural act of pollination specific to your site (bee-specific about both the local and the imports). That paints the most comprehensive picture of bees and their direct relationships to food supplies historically and today.

In conclusion, most market-garden and truck-farm crops (i.e., cabbage, green beans, and black-eyed peas); berries (i.e., strawberries, blackberries, and raspberries); and orchard crops (i.e., apples, grapes, pears, peaches, and plums), depend on the mighty pollinator, the native bee, to survive and thrive. Bees also pollinate crops that livestock eat (buckwheat, clover), and crops that produce the fibers we wear (cotton and flax). Bees also pollinate the flowers of matured plants that then yield seeds for the next year’s crop. For these reasons, native species play a significant role worthy of consideration to enrich conversations that the honeybee otherwise dominates.

Goulson, Dave. A Sting in the Tale: My Adventures with Bumblebees (2014); for an excerpt see Goulson, “The Beguiling History of Bees,” Scientific American (April 25, 2014),

Debra A. Reid
Curator of Agriculture and the Environment, The Henry Ford, Dearborn, Michigan

Bees – one short name accounts for 16,000 to 20,000 species of hairy flying insects classified into seven families. All live within social communities that depend on strict work routines. They all seek the same food sources – pollen and nectar – and each processes their harvest and preserves it in hives built in the ground, in hollow trees, or in human-designed apiaries.

The bee quest for pollen served plants well for 130 million years because bees helped plants reproduce. Bees and humans have a much shorter but more emotional relationship. Bees need plants for food, as do humans. Bees ensure plant fertilization which ensures that humans will have food crops. Over millennia, humans domesticated one species of bee to satisfy this and many other needs – Apis mellifera (the honeybee).

Humans built hives for their honeybees and clustered these hives (apiaries) around orchards, grape arbors, and other areas of intense flowering-plant cultivation. These hives take many forms, but each houses a colony of honeybees. The hard work of the pollinators filled the hives with honey, and from the hives, humans harvested the most natural and veritably the only sweetener available before the introduction of heavily processed cane sugar – honey. Honey, pollen, and bee venom also had medicinal value, as did beeswax. Beeswax when processed became the binding agent for pigments in encaustic art, a component in the mummification process, the candles that lit cathedrals, and the sealing agent for small containers. Finally, the bees themselves were part of the supply chain on which apiarists depended as they harvested queens to propagate new honeybee colonies.

Museums may hesitate to include hives in public areas because of the added expense and expertise required to maintain them or because of concerns about allergic reactions to bee stings. The hives, however, can launch numerous discussions about the long and complicated history of bee, plant, and human interactions.

The absence of hives can also lead to conversations about native pollinators, the thousands of other bee species often ignored and feared. Sometimes all it takes is a brief prompt – Bee Aware – to engage the public in an exploration of nature and human interaction.

Seasons affect the stories to tell. During flowering seasons, all bees collect pollen from flowers. Watch closely and you will see Apis mellifera as well as other species native to your area including bumble bees and carpenter bees (also in the Apidae family) and sweat bees (the Halictidae family). These all have hairy bodies. Other striped flying insects may look like bees, but if they have hairless bodies, they are not bees. These insects, including paper wasps (Polistinae) or yellow jackets (Vespinae), are predators and they can be aggressive, especially in the fall when they have no responsibilities for their colonies, and food is in short supply. Stay calm, observe them in action, take a picture to identify the species later, and enjoy your nature lesson in a museum.

This series of blogs address topics that museums of all types may find useful in interpreting the bee- human relationship.

Which came first, bees or crops? Why does it matter?
Evolution across the globe resulted in mutually dependent bees and flowering plants, but human intervention to ensure pollination of crops affects natural bee-plant relations.

What can law do for bees? A Touch of History
Old Irish laws, the Bee-Judgements, help readers assess how humans legislated behavior in support of bee work.

How has beekeeping changed over time?
An archaeobeekeeper and an archaeological open-air museum in Germany showcase pre- and proto-historic beekeeping methods.

Did anybody care about, or for, bees in the European Middle Ages? Medieval texts and iconography have much to tell us about beekeeping in Europe, from how hives were constructed to who took care of them, and… for whom.

Poetry of Agriculture? On the Significance of Beekeeping in Slovenia. Beekeeping is one of the oldest traditional activities and an important part of Slovenia’s identity, natural and cultural heritage. It is a kind of a national hobby with historic roots.

How to do bee business despite Covid-19? Some practical and personal experience from Firestone Farm, Dearborn, Michigan

What do bumblebees do that we overlook? A case-study in Norway
Farmers today rely on other bee species, specifically the bumblebee, to pollinate greenhouse plants, as this museum documentation project in Norway explores.

How do museums support bee preservation?
Learn about a range of efforts supported by AIMA museums that can help sustain bee diversity and spread the word to the general public.

Submitted by Debra A. Reid, Curator of Agriculture & the Environment, The Henry Ford, Dearborn, Michigan

AIMA member sites use tools representative of their time and place to harvest grains. The presenters at Firestone Farm in Greenfield Village, The Henry Ford, Dearborn, Michigan, use a Johnston Harvesting Company Self-Rake reaper to cut Turkey Red Wheat. The farm interprets the birthplace of Harvey Firestone, and was moved to Greenfield Village from Columbiana County, Ohio in the early 1980s. This reaper represents the type of machinery that Harvey and his brothers may have seen (or may have operated) on their family farm. 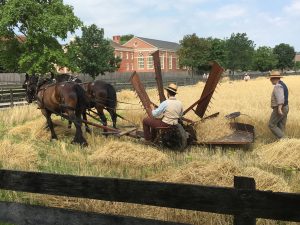