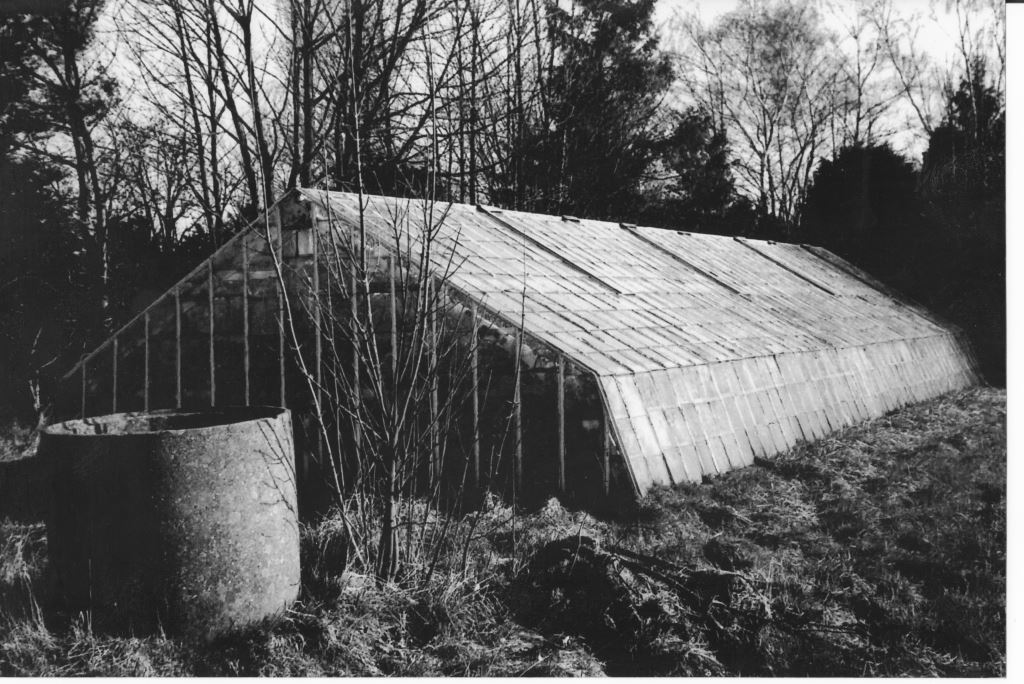 Fig. 1. Oldest conservatory of the Mechelen type in neighbouring Sint-Katelijne-Waver.

The emergence of the Mechelen (English: Mechlin, French Malines) greenhouse type coincided with the rise of vegetable cultivation in this area of Flanders in Belgium, developing in the late nineteenth century, so that it became a typical feature of the open-ground horticulture on vegetable farms right up to the end of the twentieth century. It was also called a “cabbage greenhouse” or “cauliflower greenhouse” because those crops developed into a regional specialization. 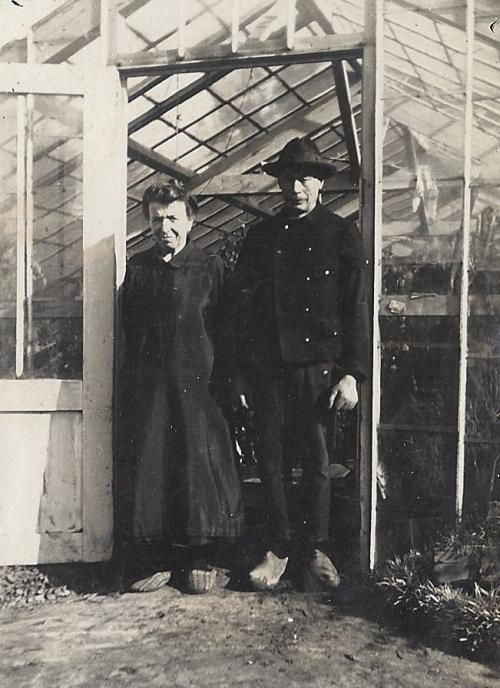 Fig. 2 André Van der Poel and Maria Van Santfoort in one of their greenhouses on the Battelsesteenweg.

How did this “monument” to local vernacular architecture come into being? Most especially, particular families were involved in various innovations, such as the A-greenhouse and the knee-greenhouse, and made a family business of building them, at first for exotic plants and grape-growing, with vegetable-growing arriving later.

In between these greenhouses, there were long water basins that were highly water-retentive in the clayey subsoil of the region. Specialized greenhouses soon appeared, such as the facade type, a half-greenhouse built against a side wall of the main building, or the forcing greenhouses that were warmed by retention of heat in the higher brick walling. Greenhouses were kept warm in three successive ways — “scalding” involved planting seedlings in horse manure, a natural method that generated heat as the manure decomposed, then a system called “cannon” heating or “walking fire,” placed on the north side of the greenhouses, and later, the thermosiphon system, a natural convection heat exchange system that circulates air without the necessity of a mechanical pump. 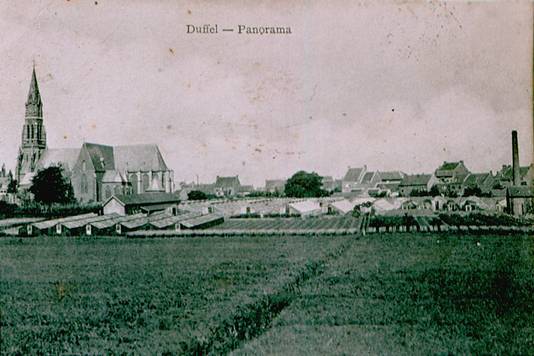 Such greenhouses were directly affected by World War I, as Antwerp was surrounded by two vast rings of fortresses, the outer one running straight through the north side of Mechelen. In some cases, the growers may well have removed the glass for storage in a safe place, as was done near Antwerp during World War II. Certainly, greenhouses were reconstructed when damaged, and one conservatory belonging to the Slagmolen family has been preserved until today, probably rebuilt after WW I with preserved or collected material. 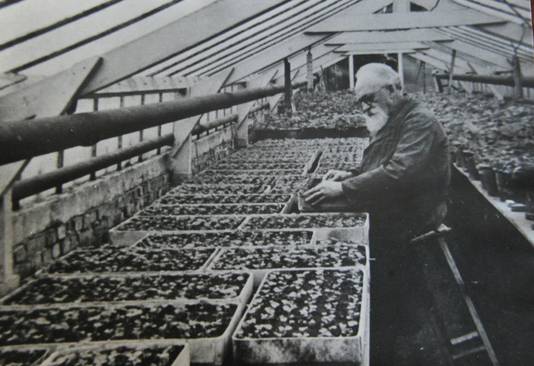 In any case, greenhouse construction clearly developed over time: early trusses were generally light, then later built to standard dimensions, while the wooden “feet” were replaced by a concrete base. From about 1925 on, the glass panes became larger and by the 1945-55 period, hammered glass was used in side walls and even in the roofs. Overall Mechelen greenhouse width was eventually standarized at 6 meters for a varying length of 20-30 meters, always a multiple of 2 meters because the trusses were 2 meters apart. Similarly, ridge height became fixed at 3 meters and door systems evolved from revolving to sliding. 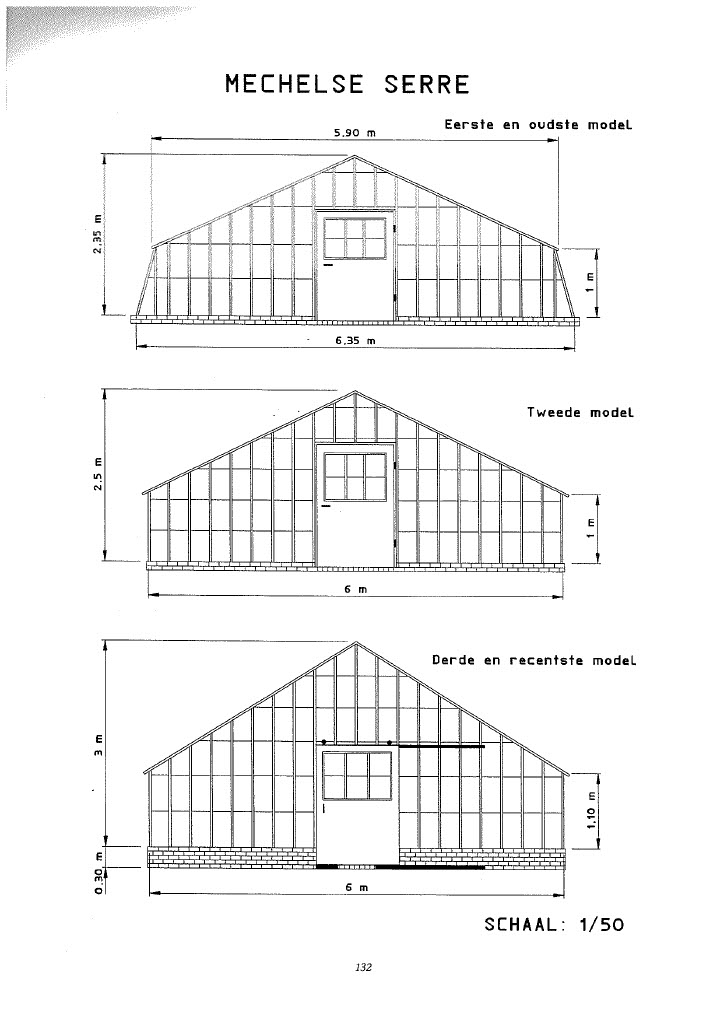 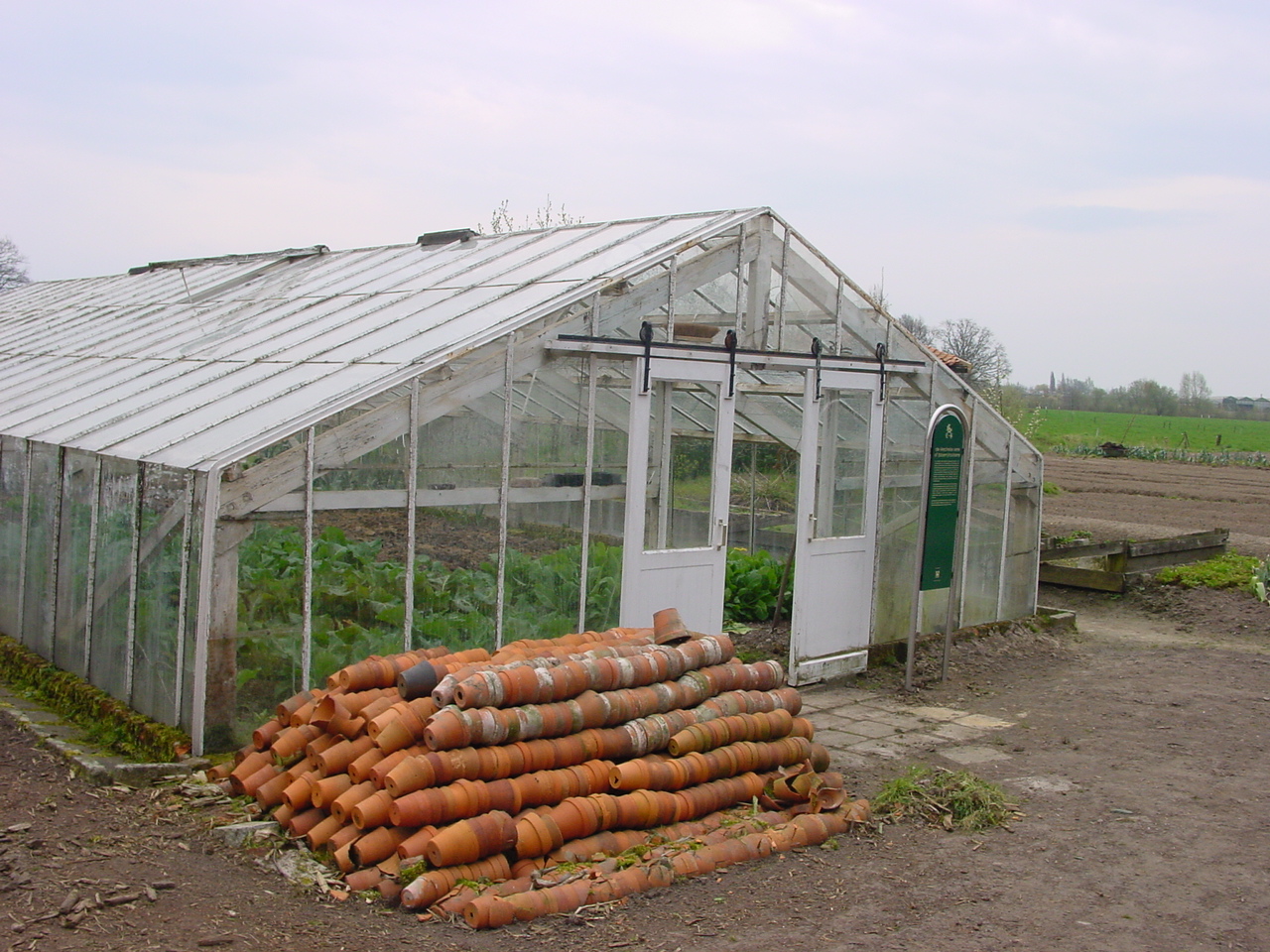 Particular vegetable crops thrived, thanks to these Mechelen greenhouses. First, cauliflower was overwintered by potting in November, then planting outside after the earliest tillage, as were tomato plants and, after WW II, pot chrysanthemums became common. The growing schedule for white and colored flowers fit in well with the calender of the companies involved, since chrysanthemums absolutely must flower for November 1st. Note that in the Sint-Katelijne-Waver area, greenhouses were mainly used in strawberry cultivation. 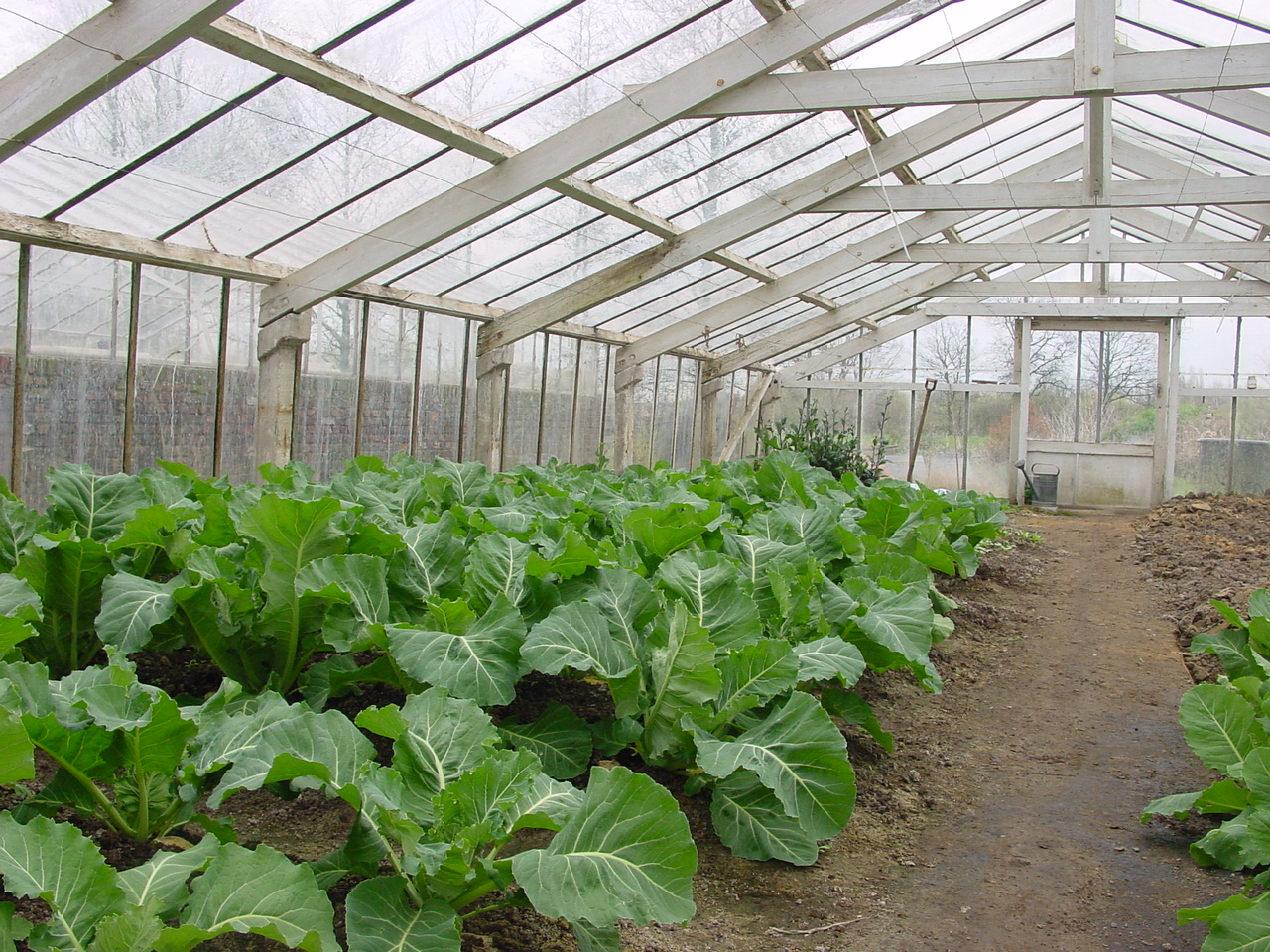 We now have inventories for all the greenhouses in three municipalities for 1850 to 1950, with a surge in production in the 1920s, but by the 1960s, this kind of agriculture came to a halt due to the construction costs of the Mechelen greenhouse, and growers switched over to other types. There were some 1500 greenhouses in Sint-Katelijne-Waver, 400 in Onze-Lieve-Vrouw-Waver and 1000 in Duffel. Differences in greenhouse size, however, mean that the number of square meters under cover is just as important as the number of constructions. 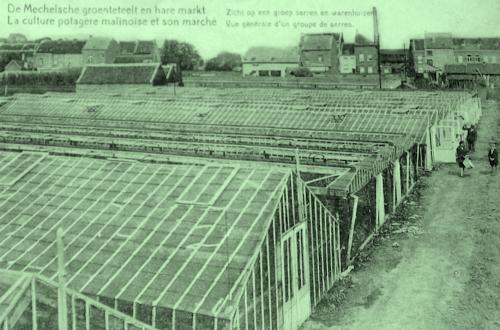 Of course, greenhouses had to be kept up carefully and this involves: replacing broken windows every other year, removing all the glass after about fifteen years to sand and paint the wood and iron of the conservatory, then to re-glaze it, repainting so that the putty layer adhered to the glass and the structure was impermeable. Well kept-up greenhouses were important when horticulturalists decided to sell their businesses on, since they could even be taken down and re-erected, so that greenhouses built in the 1920s are sometimes still used today, usually by hobby gardeners, or to store materials, even to shelter sheep.

Now, only about one hundred of these greenhouses still exist in the merged municipality of Sint-Katelijne-Waver, so as the older generation of horticulturists passes on, the last greenhouses in Mechelen may well one day disappear. They adapted to the needs of their times for nearly a hundred years and were indispensable to cauliflower and tomato cultivation, so we are attempting to save one greenhouse of each type in the municipality of Sint-Katelijne-Waver through a special Monument Commission for the greenhouses of Midzeelhoeve. 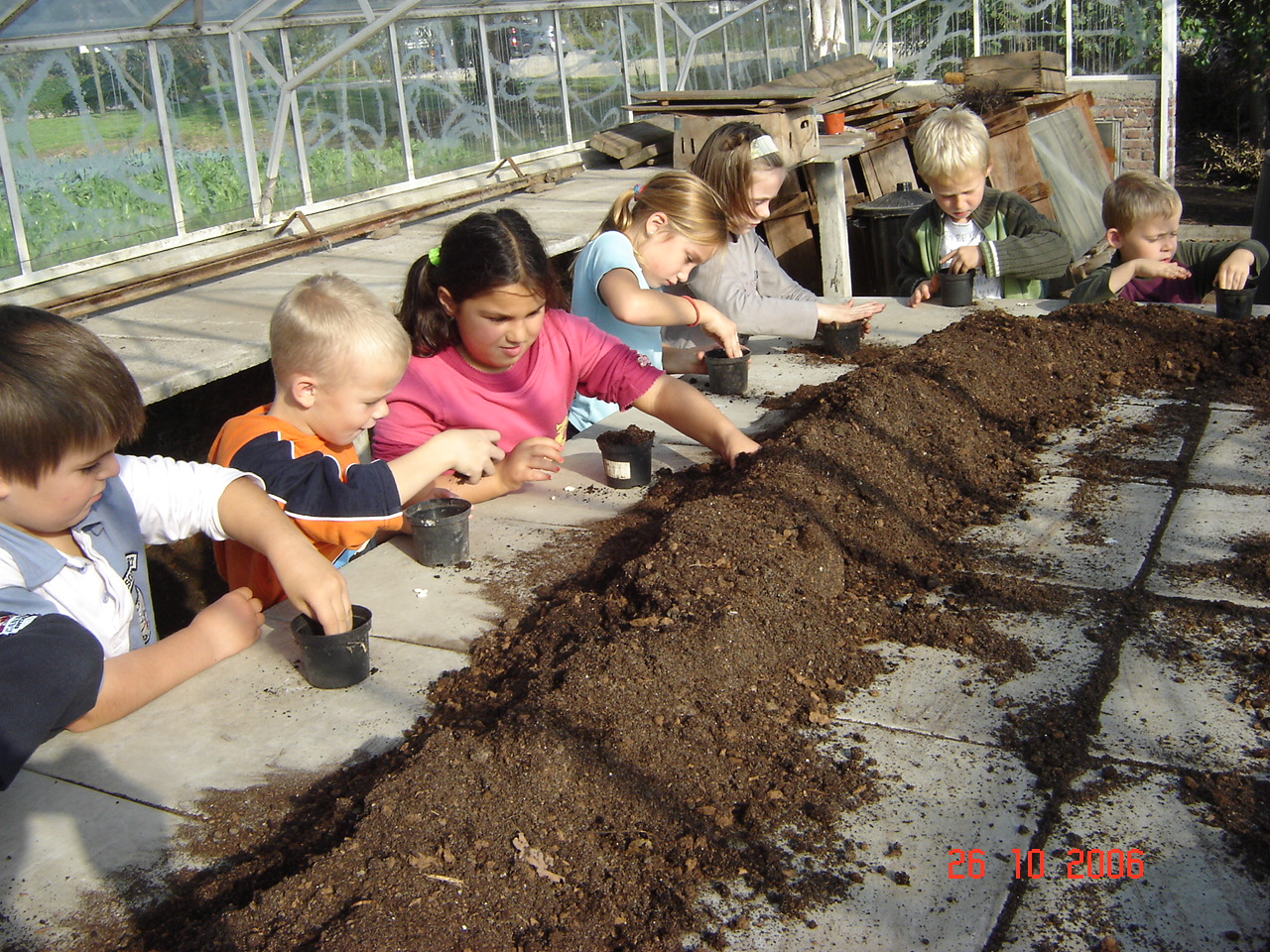 Fig. 10. School children at work in the forcing greenhouse at ‘t Grom.

And it is also a pleasure to know that our museum still uses the old greenhouses to prepare our own gardens and to introduce children and other visitors to these local monuments and actually work in them.