Editor’s Note: This post will also introduce you to the pleasure of reading names in Scottish Gaelic – like Auchindrain’s name here, “Bail’ Ach’ an Droighinn”, or the for the people who live there, Na Droighnich.

Bail’ Ach’ an Droighinn/Auchindrain Township (spoken “achan-dray-in”) is a 9-hectare museum and historic site in the west of Scotland.  The township is the sole survivor of the thousands of small farming settlements which were home to most of Scotland’s population until agricultural improvement and the industrial revolution in the 18th and 19th centuries.  It is one of the largest sites in the world where the traditional, vernacular buildings of a complete rural community have been preserved in their original place and setting, rather than being adapted for modern re-use.

The people of Auchindrain, Na Droighnich, are a mysterious bunch. Although we can trace them through census records, archival documents and photographs, it can be hard to picture them as real people who lived, loved and died within the buildings and landscape features that survive today. Luckily for us, the landscape has preserved its own form of history in the form of middens – concentrated piles of rubbish left by generations of people, telling us stories about what they ate, how they cared for themselves, and how they fitted out their houses.

The land surrounding Auchindrain has been occupied since the Iron Age, but the traces of these early people have been buried and lost, with many of the materials they used such as wood, leather and plant fibres decaying over time. The large-scale production of glass from the late 18th century on begins to tell us new stories, as the physical properties that make glass such a useful material for holding products, including how robust and unreactive it is, also help preserve it within the ground. 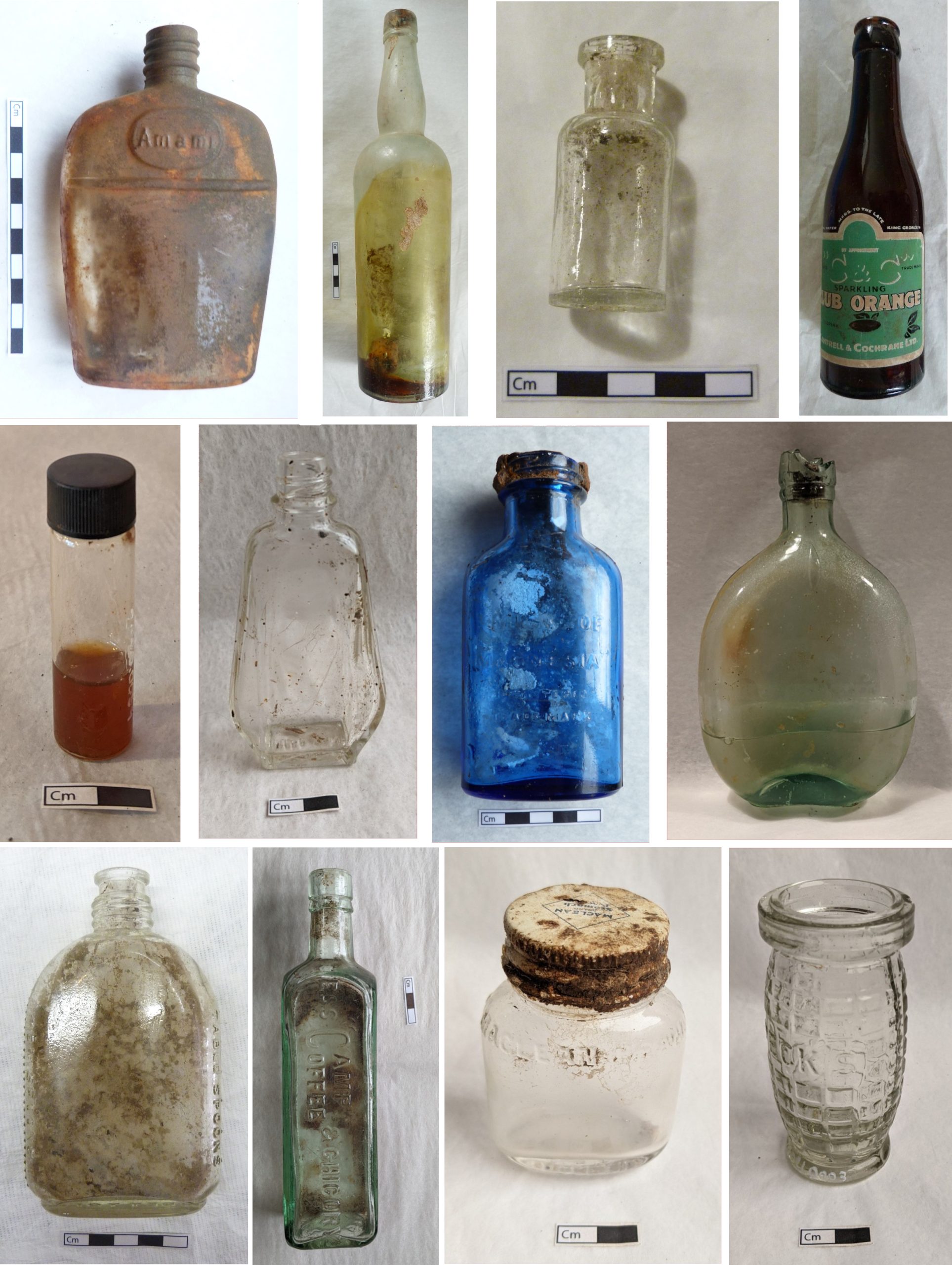 Fig. 1 – The middens at Auchindrain Township produce glass bottles of all shapes and sizes.

Na Droighnich were poor and thrifty people who reused everything they could for as long as possible. Within barns we have found examples of bottles containing grease, and within attics there have been empty lidded jars awaiting new contents, but sometimes things became too broken to use. We take it for granted today that glass is one of the easiest of household materials to recycle, but in the past glass was not recycled, and with no municipal rubbish collections or tips, anything too broken to reuse was piled into ruined buildings and unused corners. By the time Auchindrain became a museum in the 1960s, almost all of the ruins within the township had had rubbish dumped in them, ranging from bits of leather shoes to complete bottles. 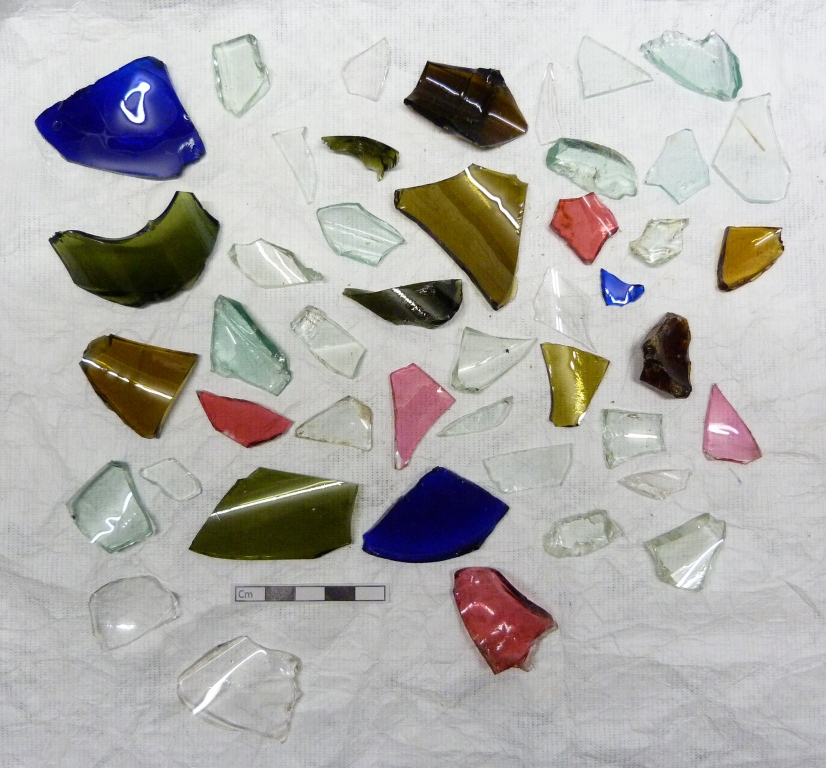 Fig. 2 – Sometimes all that is left are sherds.

Early glass had little decoration and it is frustrating, being able to tell so little from the thousands of glass sherds and plain glass bottle stoppers that we’ve discovered over the years, but sometimes even the smallest fragments do tell us something. Did you know that poison bottles were often made of blue glass, so even if someone couldn’t read they’d still know the contents were dangerous? And as well as plenty of blue sherds we’ve also found lots of pink ones, although we have yet to work out what these bottles contained. But the moulded glass, where we see names and patterns, allows us to identify products and time periods. 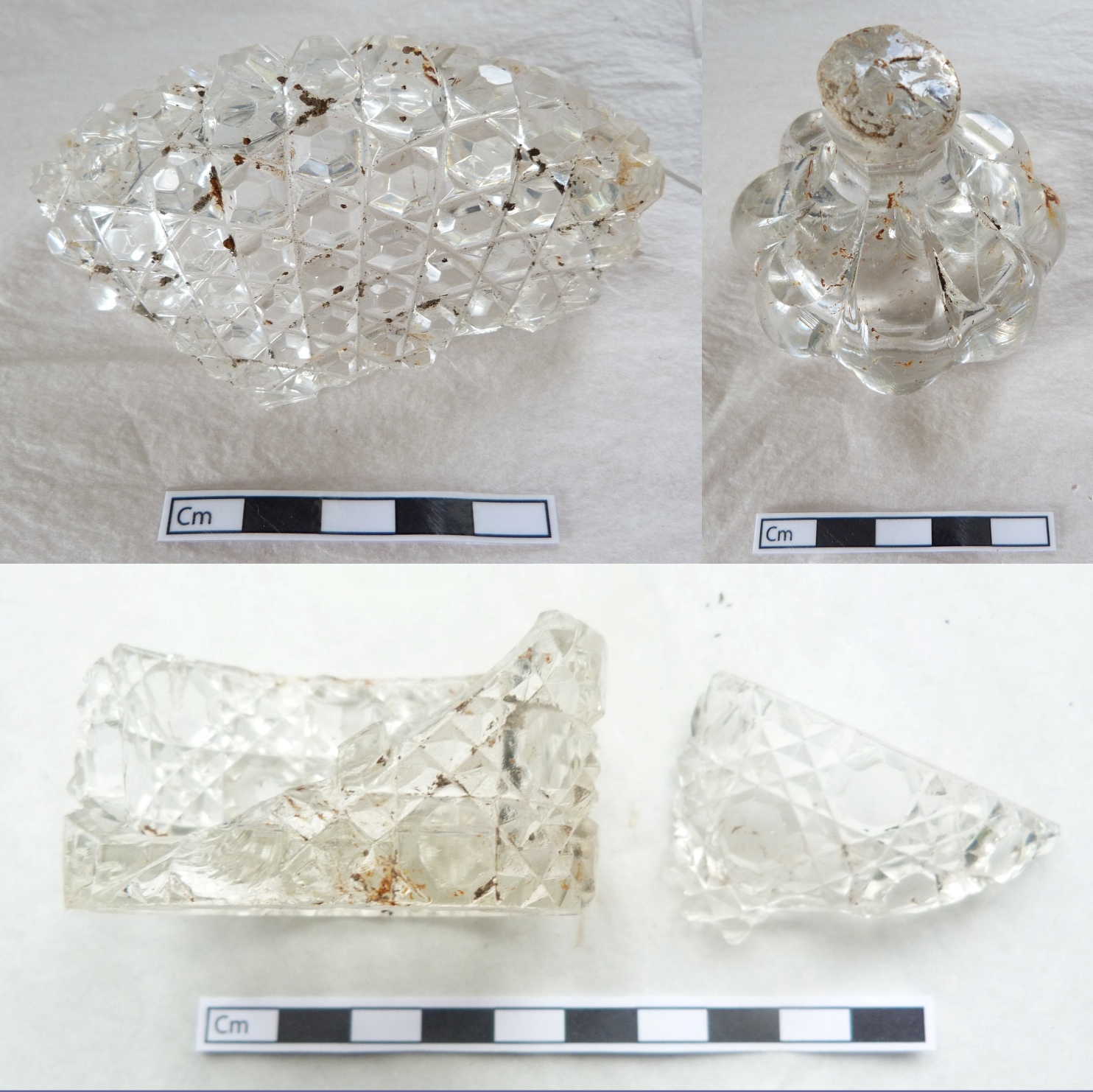 It can be easy to image that those working the land within rural Scotland spent their lives splattered with mud and living within cold, dark homes with few thoughts other than survival. But the glass remains tell a very different story, with finds including sherds from decoratively cut or moulded glass dishes and bottles, even a glass stopper from a wine decanter, show us that the homes of na Droighnich were furnished with decorative items as well as functional ones. Bottles for household products are common, such as Judge’s Furniture Polish from Newcastle upon Tyne. There are countless ink bottles too, as well as glass marbles that belonged to the children.

Fig. 4. Left – The Munro boys standing at the back, pictured around 1910 with their parents and sister, were known as heartthrobs. Right – Bella Munro and Flora McIntyre, pictured in the 1930s, could have been users of Amami hair setting liquid. 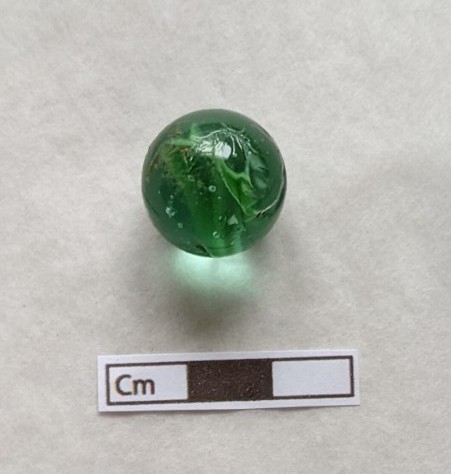 By the early 20th century we begin to see them taking pride in their appearance, too. The women used NULON hand cream and Amami hair-setting liquid, and the men Brylcreem hair cream. It’s almost impossible to link glass from the middens to any individual, but we do know that a bottle for Elfrida Bay Rum, found stashed within an attic used as a bedroom, must have belonged to one of the Munro boys. We’ve been told that they were heartthrobs in their time – we know that in the early 20th century, a girl from a nearby village would regularly visit Auchindrain to spend time with the Munro boys, whilst telling her mother that she was going to see an old lady who lived alone!

The township’s diet included things like carrots, onions and kale grown in the township’s vegetable gardens, or “kaleyards”, as well as oatmeal and dairy produce. Meat was a rarity. The MacCallums, our last tenants, would slaughter a sheep and salt down the mutton several times a year: on special occasions a piece would be taken out of the salting barrel, steeped overnight in water, and made into mutton broth. Bottles found within the middens tell us that condiments were very common, making meals that were otherwise simple and monotonous more exciting. In particular these include three brands of spiced brown-coloured sauce – Mason’s OK Sauce, Goodall and Backhouse’s Henderson Relish and Garton’s HP Sauce, which later became the HP sauce (HP is a brand name) for a brown sauce we know today (usually with a tomato base, blended with malt vinegar and spirit vinegar, sugars such as molasses, dates, corn flour, rye flour, salt, spices and even tamarind). And they brought in soft drinks too, including soda from Cochran and Co., and from Lawson’s Apothecary in Greenock.

From what we have found in the middens, a particular favourite was Camp Coffee with Chicory, which is still used today as a coffee flavouring for baking. The increase in these new, modern brands seems to have come with its own problems though, as the most common intact glassware we find are bottles of MacLean’s Stomach Powder and Californian Fig Syrup, both used to treat indigestion, acid reflux and other stomach conditions.

Although we can’t tell every story of Auchindrain through the glass we find in our middens, it adds colour to the lives of the people who once called our township home. Today, modern processes mean that glass is one of the products that can be most efficiently recycled, with almost 100% recovery of original material.  We’re sure na Droighnich would have recycled glass if they could have done, but that’s not how things were. We may no longer be leaving middens for our descendants to sift through, but we are leaving a better legacy for the planet as a whole.