The AIMA was designed as a way to maintain scholarly links between East and West during the Cold War. The 1st International Congress of Museums of Agriculture (‘CIMA I’) met in Czechoslovakia (now the Czech Republic and Slovak Republic) in 1966.

The image above shows delegates at this gathering outside Chateau Liblice. Władysław Rogala, Director of Poland’s Museum of Agriculture in Szreniawa, described CIMA I in his Museum’s annual publication. In the image below, the CIMA I logo is visible on banners in Chateau Liblice. In 1989, at the close of the Cold War, Zdeněk Tempír wrote a timely account of AIMA’s origins and early years. In 2016, honorary member Ted (E.J.T.) Collins shared some personal reflections of the early history of the AIMA. 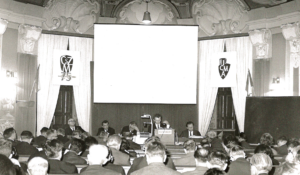