Humans are creatures of habit, and since the prehistoric era have kept track of time. A popular artistic representation of the calendar year from the medieval period onwards were Labours of the month, each of which symbolised a month of the year and depicted a relevant seasonal agricultural activity or pastime. Labours of the Month were depicted in a variety of artistic media including manuscript illuminations, sculpture, prints and stained glass. These were popular subjects for both religious and secular contexts, sometimes shown alongside symbols and signs of the Zodiac and demonstrated a human response to God’s ordering of the Universe as well as the importance of agriculture in society.

Labours of the Month were a prominent theme in medieval stained glass windows, and surviving examples can be seen today in both Chartres Cathedral and the basilica of Saint Denis, just outside Paris. This theme is also reflected in several stained glass panels now in the collection of The Stained Glass Museum [https://stainedglassmuseum.com/], the only museum dedicated to stained glass in the UK. Two small 15th century roundels from Matfield House, Kent, which would have originally been part of a complete series, illustrate agricultural activities in the months of September, (Harvesting wheat crop), and November (Killing a pig). Each roundel shows a solitary agricultural labourer at work, donning a hat, stockings and buttoned up tunic with skirt and shoes, framed by a border and a scroll identifying the month in painted gothic script at the top of the scene. 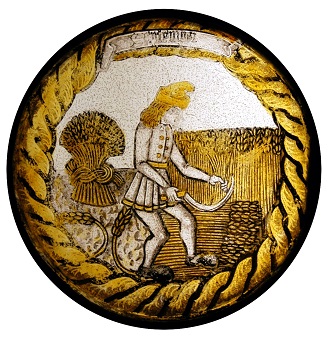 The roundel representing ‘September’ shows a labourer in a field of wheat gathering several stalks of wheat together in his left hand, whilst holding a sickle in his right. At his feet are stalks of wheat he has already cut, and in the background is a neatly gathered sheaf, tied together with twine. The artist has even taken care to show the labourer stepping on some stalks he has missed, and the parts of the field where the crop has already been harvested bear marks indicating the remaining severed stalks in the ground. 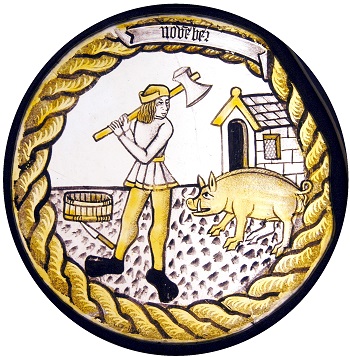 In the panel representing ‘November’, the pig’s fate has been sealed; the labourer stands wielding a long-handled axe over a boar or hog with bristly back and large tusks. The killing of livestock to provide meat for the winter months was an important part of the agricultural cycle.

Two further panels in The Stained Glass Museum’s collection, dating to the 19th century, designed by Pre-Raphaelite painter Dante Gabriel Rossetti (1828-1882) and made by the well-known firm of Morris & Co., demonstrate the timeless appeal of these subjects. These two panels were once part of a series in a window in the drawing room of Silsden House, Keighley, the home of Charles Hastings, a Bradford textile manufacturer. They provide an interesting comparison to the Matfield House scenes. Each also depicts a solitary agricultural labourer, framed by a thin inner border of white glass and a thicker border of green glass. 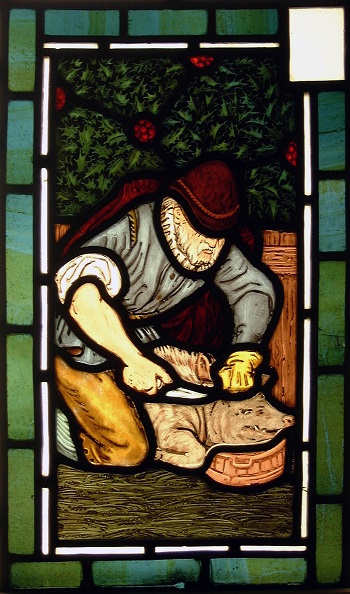 The ‘Killing of a Hog’ is this time the subject of the panel representing ‘December’. The labourer, wearing a blue tunic over a shirt and a hat, is shown in the process of killing a hog and preparing to catch the blood that results. Later, processing the hog included scouring the bristles from the dead hog’s back. 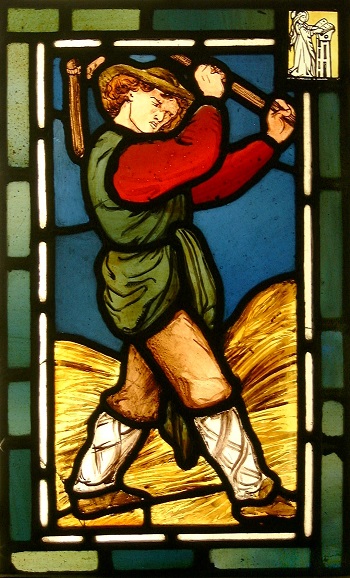 In the panel depicting ‘August’ we see an agricultural labourer wearing a shirt and green over tunic, brown trousers and a hat threshing. Although threshing machines were developed from the 17th century onwards, this labourer threshes by hand with a grain flail, no longer used today. This tool is composed of a swipple, a long piece of wood used to strike the grain, and a handle connected by a leather chain. In the top right-hand corner of the panel is a small image of the Virgin Mary reading, likely representing the Zodiac symbol for Virgo. The Zodiac symbol which would have accompanied the ‘December’ panel is now lost.

Images like these have influenced many modern artists since, including contemporary stained glass artist Rachel Mulligan. Mulligan’s stained glass panels depicting the Labour of the Months [https://www.rachelmulligan.co.uk/project/labours-of-the-months/], made in 2010, were inspired by medieval examples of the subject (such as those previously mentioned on this website [https://www.agriculturalmuseums.org/2022/10/09/agriculture-the-international-year-of-glass-2022/]) and her own experience sharing an allotment with three friends. Mulligan’s panels, which are now in the collection of Godalming Museum, Surrey, tell the story of a year on the ‘Lottie’ (allotment) in the UK. 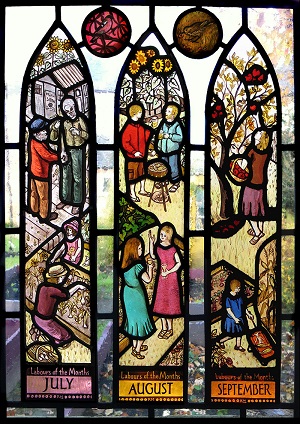 Fig. 5. July, August, September (Labours of the Month), 2010. Designed and made by Rachel Mulligan. Now in the collection of Godalming Museum, Surrey. Image © Rachel Mulligan, reproduced with permission of the artist.

In our present-day global capitalist era where, all year long, we can buy a variety of fresh produce grown around the world from plentifully stocked supermarkets, Mulligan’s panels demonstrate the fact that growing your own produce today tends to be a labour of love and popular pastime more than a necessity. In her own words, these panels ‘reflect the social side of gardening, as well as the hard work and bountiful produce’. In the scenes representing the cold months of January we see the friends work together to build their raised beds, using modern electric drills and composting organic waste. In February the trees are pruned and in March the first seeds are sewn. In the summer months the allotment comes alive as a place for socialising with friends enjoying a BBQ and drinks in August, whilst November sees a family huddled around a bonfire and enjoying hot tea and cake outside on a warm December day. 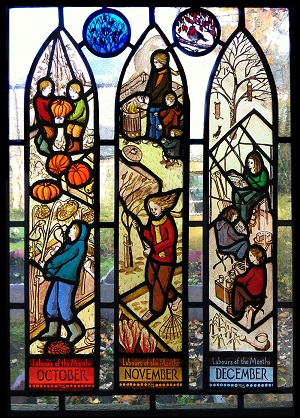 Fig. 6. October, November, December (Labours of the Month), 2010. Designed and made by Rachel Mulligan. Now in the collection of Godalming Museum, Surrey. Image © Rachel Mulligan, reproduced with permission of the artist.

Stained glass artists have been drawn to this subject throughout history for several reasons, not least the human desire to document and chart the calendar year and the changing seasons, but also to document rural working life. In their original settings these rural scenes in stained glass would have been illuminated by the sun, and changed appearance over the course of the day, providing a dynamic translucent artwork only visible in daylight. Today, with artificial lighting, we can enjoy looking upon these scenes within museum collections outside of daylight hours, and they retain their interest as historic examples of agricultural processes and tools and universal appeal of the changing seasons.

About the Author: Jasmine Allen is Director and Curator of The Stained Glass Museum, an independent museum located in Ely Cathedral, with a specialist collection of stained glass spanning the 13th to the 21st centuries, from across the UK and Europe [www.stainedglassmuseum.com].  Jasmine studied Art History at the University of York. She has published widely on stained glass in the modern period, and regularly gives public talks and tours on the history of this unique art form.